The views and opinions expressed here are solely those of the author and do not necessarily reflect the views of Cointelegraph.com. Every investment and trading move involves risk, you should conduct your own research when making a decision.

The market data is provided by the HitBTC exchange.

Bitcoin continues to be pounded by negative news. Unconfirmed reports about Twitter following the footsteps of Facebook and Google in banning cryptocurrency ads pushed Bitcoin’s price below $8,000 on March 18.

The focus will probably shift to the G20 summit, where cryptocurrencies are expected to be discussed. The Financial Stability Board (FSB), which advises on and coordinates financial regulation in the G20, is unlikely to introduce new rules, but the news will still keep the markets on edge.

While this news and events are keeping many investors at bay, Tom Lee, a managing partner at Fundstrat has a different opinion. He believes that Bitcoin can reach $91,000 by March 2020, if it repeats its past performance of rising from the ashes following sharp declines.

Do we spot any buying opportunities? Let’s find out.

Bitcoin is in a downtrend, as it is trading inside the descending channel and below both moving averages. Though the path of least resistance is on the downside, we believe that the price action points to a possible change in trend within the next few days.

For the past few days, the BTC/USD pair has been clinging to the resistance line of the descending channel, which shows that the bears are losing momentum.

Judging by the two previous years, prices rebound sharply after the RSI enters the oversold territory. Therefore, we should look for an entry opportunity if the cryptocurrency plunges because of the panic selling.

Traders can also enter long positions if Bitcoin breaks out of the channel and both moving averages.

We like the way the cryptocurrency has held above the February 06 lows despite the negative news. This gives us confidence that a bottom is around the corner, but we would recommend buying only after some confirmation on the charts. In case of any fall, the next major support is $6,075.04.

Ethereum broke below the critical support of $565.54 and plunged to a low of $452.32 on March 18. This shows that the bears have an upper hand. The fall has pushed the RSI into the oversold territory, but we still don’t have any confirmation that the downtrend has ended. Bitcoin Cash dipped below $900 levels in intraday trading on March 18 but closed well above it. The $900 level has proven to be strong support. On the upside, the downtrend line is major resistance. Above this, there are a slew of resistances between the $1,100 to $1,225 levels.

We don’t have any buy setups on the BCH/USD pair at the moment. Therefore, we do not recommend any trade on it.

Ripple dipped below the critical support of $0.56270 on March 18, but buying at lower levels again pushed prices above the support line. Any up move will face resistance at the 20-day EMA and the 50-day SMA. We shouldn’t be fixated on the target. We need to liquidate the position if the price struggles at any specific level.

Stellar is in a downtrend. It continues to trade below both moving averages and the downtrend line. It has been falling inside a descending channel since the first week of this year. As long as it remains inside the descending channel, it is vulnerable to selling pressure. 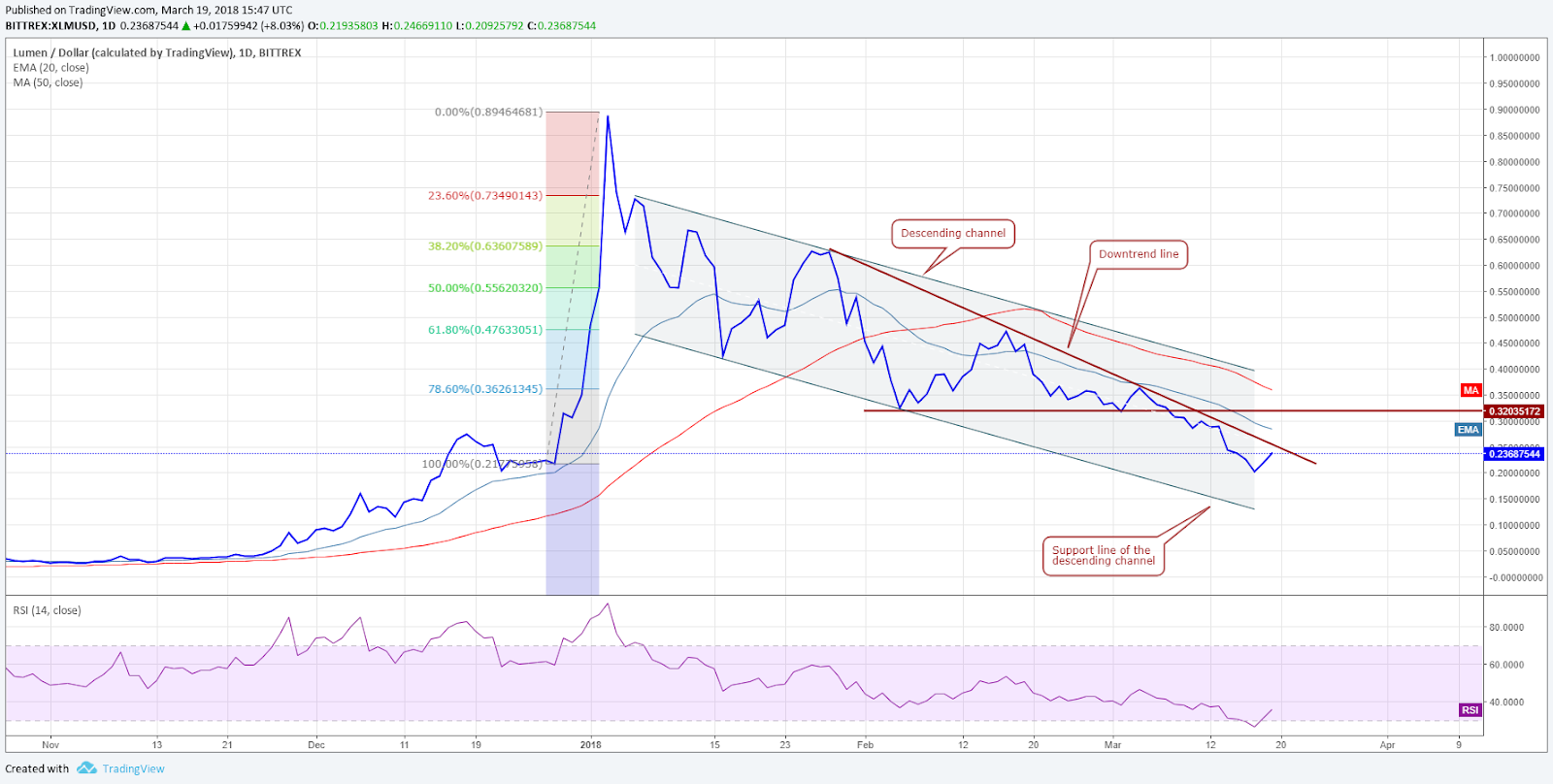 It fell below our anticipated support of $0.22. At the moment, the XLM/USD pair is close to the downtrend line, which has strong resistance. If this level is crossed, the next critical zone will be between $0.284 and $0.32.

We suggest waiting for the trend to change before making any trades.

Litecoin fell to $144.544 on March 18, very close to our forecast level of $141. It is pulling back towards the downtrend line, which will act as resistance. 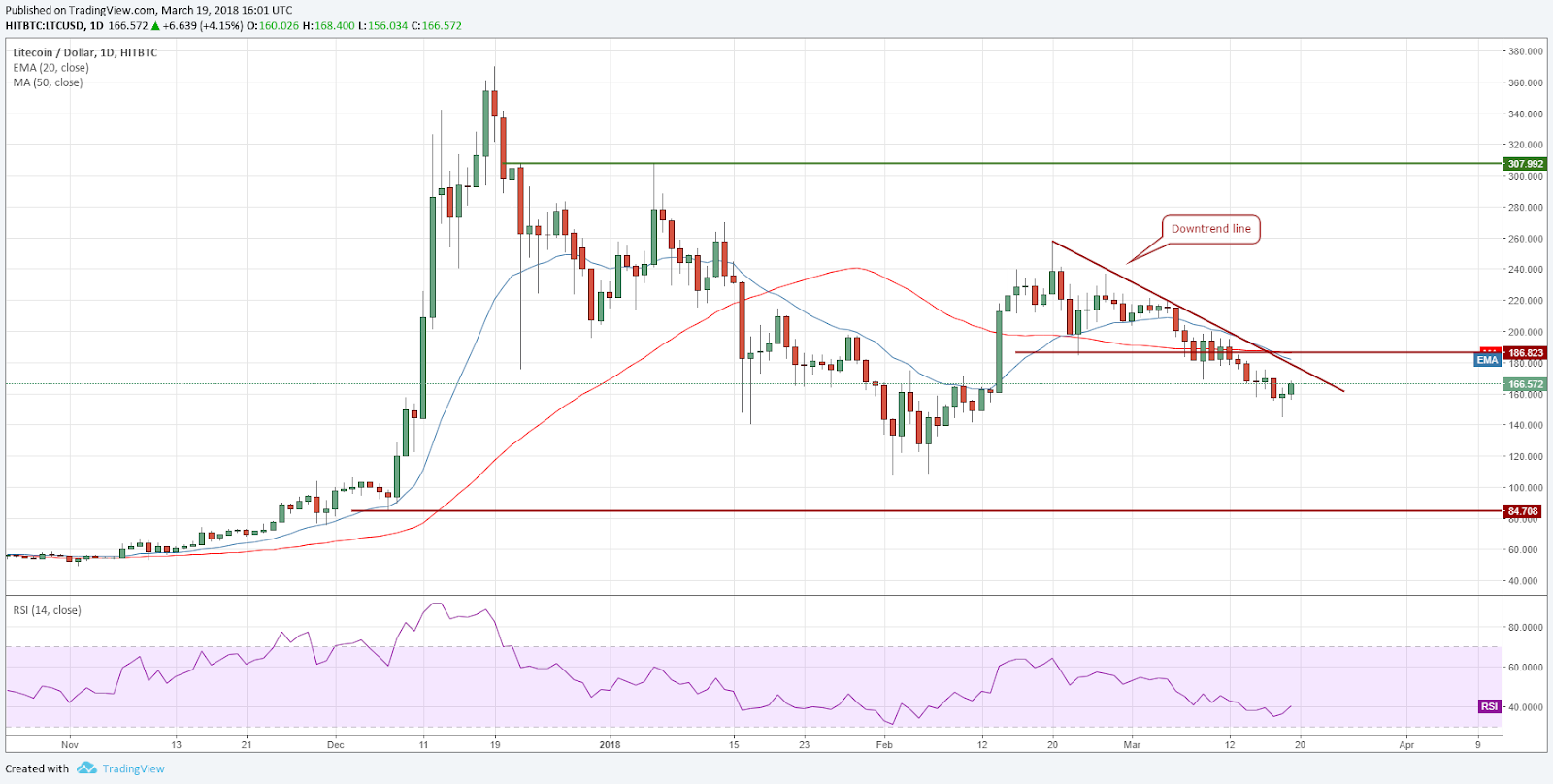 The LTC/USD pair is not showing any trend formation. The $176 to $186 area will act as stiff overhead resistance.

The moving averages are flattening out, criss crossing each other, which points to a range bound trading for the next few weeks.

We should not risk buying, until we see a specific trend forming. Any attempt to rally will face resistance at the downtrend line, which has not been crossed since mid-January of this year. The ADA/BTC pair will attract buyers once it sustains above 0.000025 levels.

We recommend remaining on the sidelines until the trend turns up. 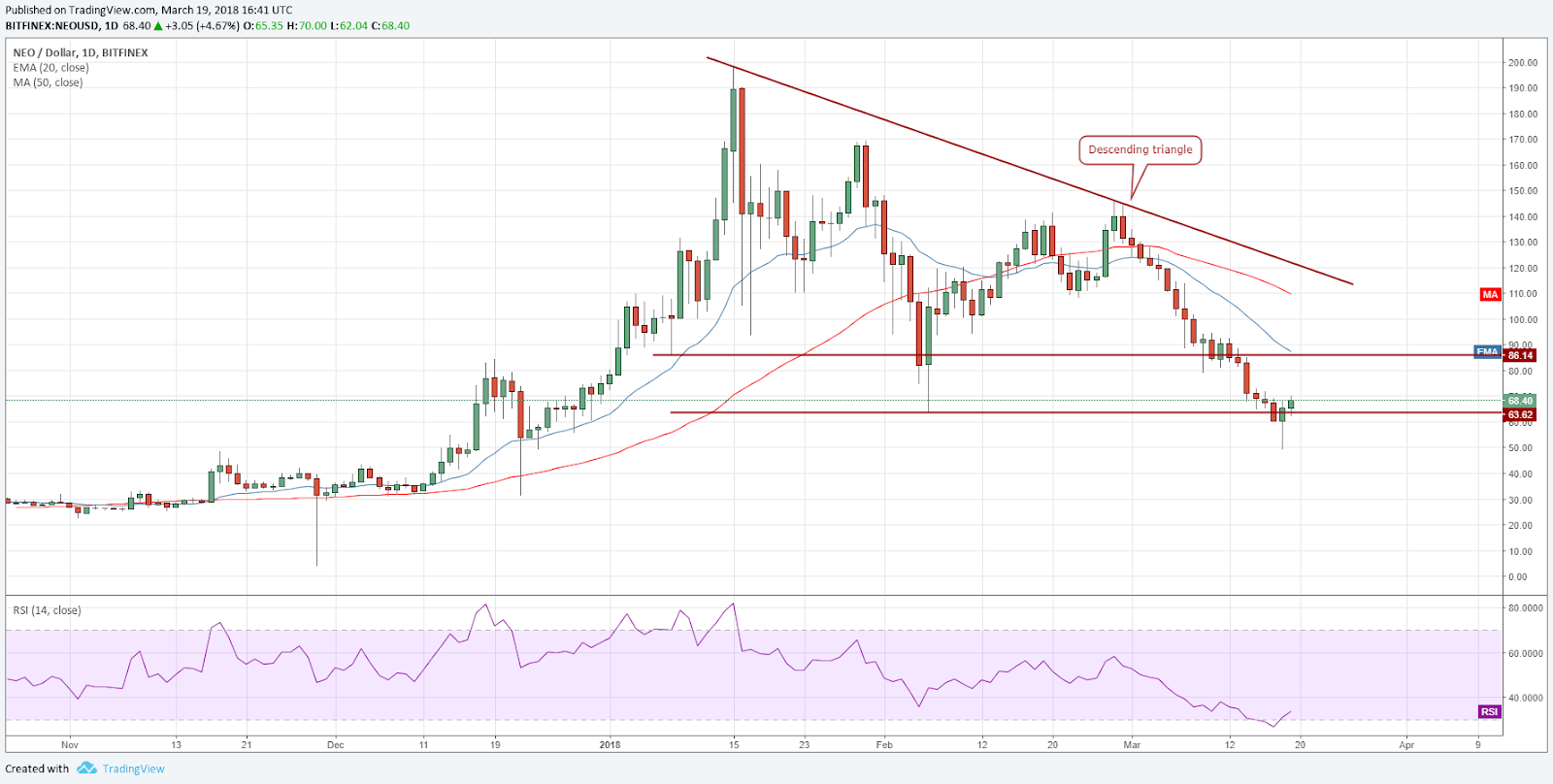 The $86 level will act as stiff resistance on any pullback. If the bulls fail to break out of the horizontal resistance and the 20-day EMA, we can expect a range bound action for the next few days.

If the NEO/USD pair turns down from the resistance and sustains below $50 levels, we can expect further selling to push the cryptocurrency back to $30 levels.

A breakout above $86 will be a bullish move; we might see a rally to $110 levels afterward.

We had been expecting a fall to $3.26 levels, but EOS turned up from $3.8723. It is also trying to correct the oversold nature of the RSI. 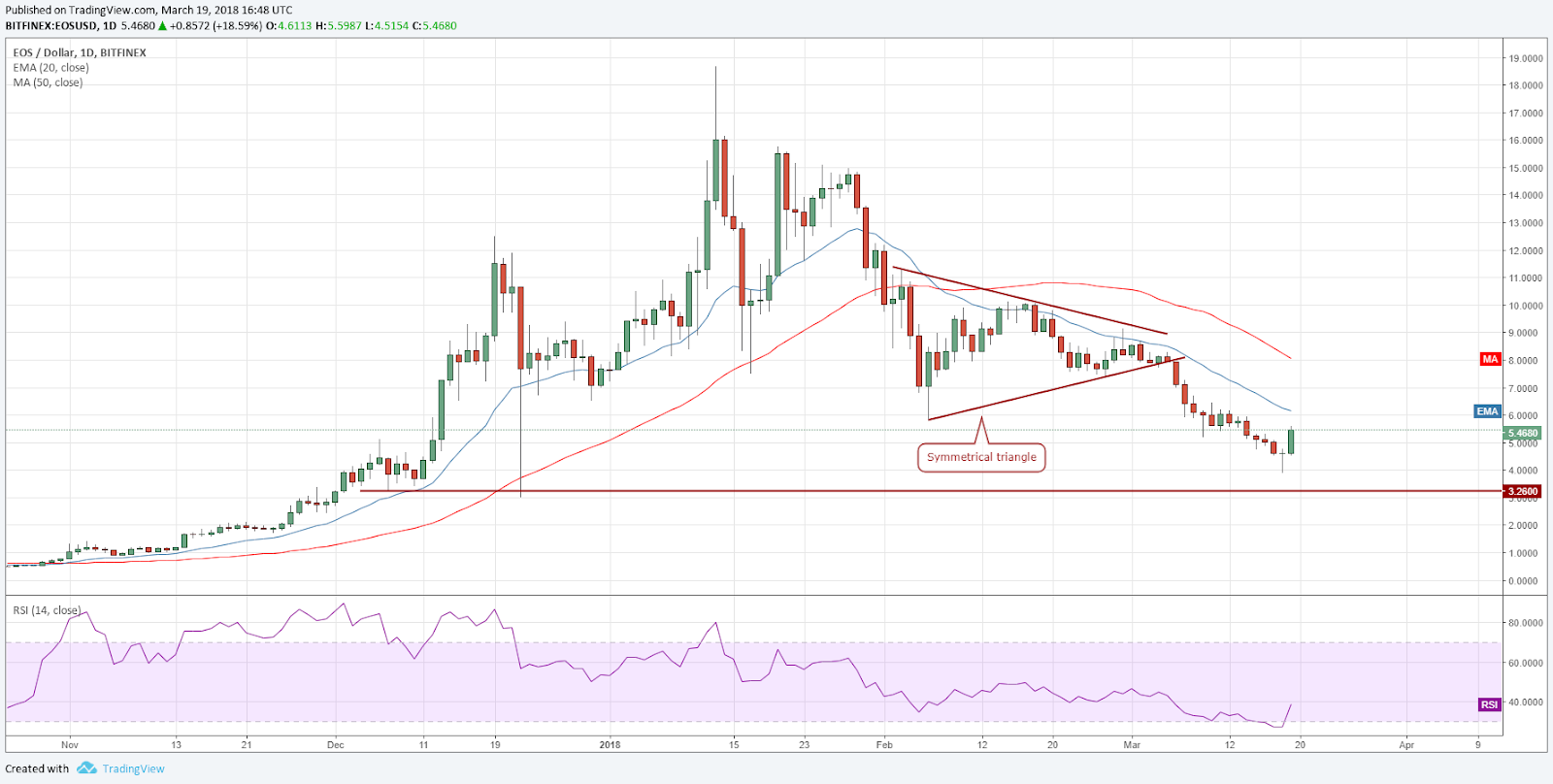 The bulls will face stiff resistance at $6 and then at $8 levels. The EOS/USD pair will gain strength once it trades above $8.

If prices turn down from the 20-day EMA, the cryptocurrency can fall to $0.326 levels.

The market data is provided by the HitBTC exchange. The charts for the analysis are provided by TradingView.

How to Backup Your Microsoft Azure Storage Accounts | Hacker Noon