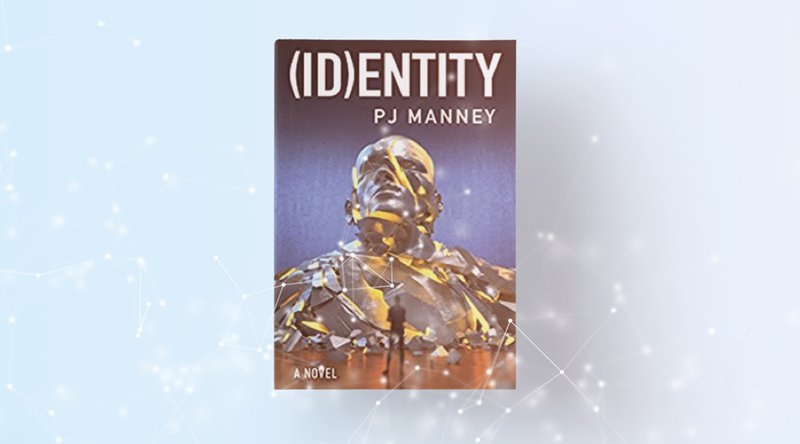 Philip K. Dick Award finalist (R)evolution, a 2015 near-future science fiction thriller by PJ Manney, ends with the main character’s consciousness transferred to a supercomputer, accompanied by the otherworldly notes of David Bowie’s “Space Oddity”: but with the words “Commencing download: Servers on …”

The story continues in the sequel, (ID)entity, the second novel in Manney’s Phoenix Horizon trilogy, published on October 10. “Major Tom” is one of the many names taken by the protagonist, who starts as Peter Bernhardt, a nanotechnology scientist and entrepreneur, but is forced to assume many other identities by the Bad Guys of the Phoenix Club, who want to take over the world using lots of money, amazingly futuristic tech and powerful connections in the U.S. government.

In (ID)entity, the consciousness of Bernhardt, aka billionaire investor Tom Paine (among others), is embodied again, first in a lifelike sex bot. Major Tom continues to fight the Phoenix Club and archenemy Carter Potsdam, now on the loose as another download. You won’t find other spoilers here, so you are warmly encouraged to read the book.

Blockchain technology takes center stage in Manney’s near future and is inherent in most real estate, trade, barter, identity, gambling and other transactions. There are many global blockchains used by different people and entities for various purposes, ranging from mainstream (but definitely not to be trusted) blockchains operated by Big Business and Big Government (China is still in the lead) to “several uncorrupted blockchains out there, not manipulated by governments and multinational institutions.” Some of these independent blockchains are very popular, and their currencies are widely used.

“In (ID)entity, blockchains are used for more than the multiple world currencies they underpin,” Manney told Bitcoin Magazine. “But their use is not uniform around the world, because a Gibsonian future is never evenly distributed. Some record news, other government records. I posit that there’s a greater malleability to blockchain technology than traditional evangelists admit. Because nothing online is safe. Ever. China could, at any minute, decide to launch a 51 percent attack. Probability or likelihood doesn’t matter when you’re dealing with large system failure. It’s the possibility that counts.”

Manney doesn’t describe herself as a techno-optimist or techno-pessimist but as a techno-realist. “In this case, I show how cryptos and the blockchain could go completely wrong,” she said. “I also hope it’s a call to make cryptos and the blockchain safer and more independent from outside manipulation. That’s my goal in all that I write about: find the potentials for bad use and make it a cautionary tale that will help fix it for the future.”

Science fiction is perhaps at its best when it embeds important issues in a compelling narrative that encourages the reader to try and find ways to connect science fictional extrapolations to current discussion. Manney’s fiction can stimulate us to preempt undesirable patterns in the evolution of key technologies, such as nanotech, artificial intelligence, consciousness downloading (often dubbed “mind uploading”) and blockchain technology. It’s wise to bear in mind that everything can, and will, be exploited for bad ends.

“I admit to a certain amount of handwaving, common to all SF [science fiction], when it includes technologies still in development,” continued Manney. “I assume that blockchains will best be maintained outside of nation-states and proliferate into many aspects of life. And given that proliferation, ways will be found to corrupt them. I can’t tell you how: I don’t code. But that’s the history of all technologies. As much as their creators believe in their world-changing positive properties, they also turn blind eyes to their corruption.”