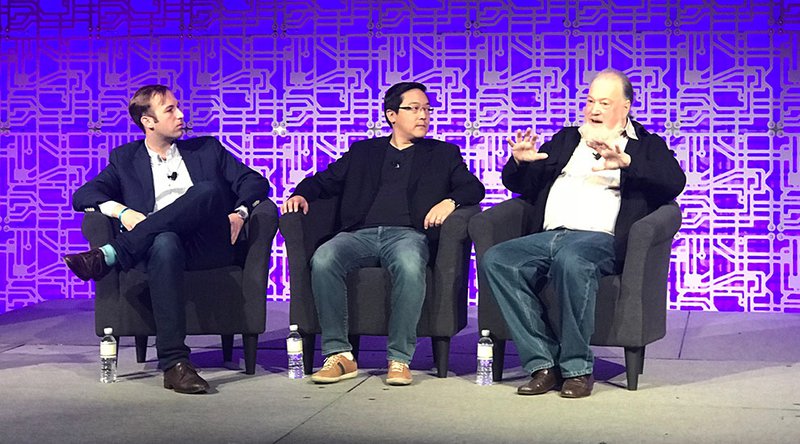 David Chaum, the cryptographer credited with starting the cypherpunk movement in the 1980s and launching eCash, an early form of virtual money in the 1990s, thinks people are taking financial privacy a lot more seriously these days.

“Consumers are starting to lose faith in online services and privacy protections they hoped were in place,” he told the audience at Money 20/20 in Las Vegas on October 23, 2018. Pointing to recent failings of social media sites like Facebook and hinting that far better privacy options are around the corner, he stated: “The cat is out of the bag.”

In a fireside chat with Charlie Lee, founder of Litecoin, a cryptocurrency based on Bitcoin’s code, Chaum spoke broadly about the future of digital privacy. He also took the opportunity to promote his latest venture: a blockchain-based payment and messaging system dubbed “Elixxir,” which Ripple co-founder Chris Larsen is backing. David Bailey, CEO of BTC Media, moderated the talk.

People are more conscience of privacy because the scope of privacy has changed, Chaum said. In the past, the focus was on how to shield personal information; now the concern is more around the vast accumulation of metadata. “People are more aware of the dangers of being tracked,” he said.

Switching the topic to his own project, the father of online anonymity, who is known for his ambitious projects in the past, boasted that Elixxir is capable of processing hundreds of thousands of confidential, quantum-resistant transactions per second. (In contrast, Bitcoin can only handle seven transactions per second.) “We knocked the ball out of the park,” he said. (Elixxir is not publicly available yet, but a betanet is due out in Q2 2019, according to the project’s website.)

In a separate interview with Bitcoin Magazine, Chaum shared more information on Elixxir. “We have it; it is running,” he said, as if to clear up any doubts. He also emphasized the importance of blockchain technology: “The opportunity to provide a stronger, fresher approach to consumer privacy is owned by blockchain because blockchain is not owned by the powers that be,” he said.

Acknowledging that payment apps and messaging apps are becoming increasingly intertwined, Chaum described Elixxir as a blockchain-based version of WeChat, the mobile payment and messaging app that has become hugely popular in China.

“Elixxir will appear just like WeChat with the same performance, in terms of data plan usage, battery use and speed, only it will be clear that blockchain is inside,” said Chaum. The platform will not serve “corporate masters” but instead provide an “open source protection for individual liberty.”

One problem with WeChat is its lack of privacy. “My guess is that most people in China realize that the government has considerable access to WeChat and can even turn off the accounts and access the bank accounts of certain users,” Chaum said. (Earlier this year, the Chinese government even admitted it has access to deleted WeChat messages.)

He feels that a consumer scale solution needs some level of privacy to work. So far, consumers have had to settle for a lack of privacy, because that is all that is available. That said, he feels that given a choice, people will choose a privacy-focused payment and messaging app over one that third parties can eavesdrop on, especially if it appears equally as trendy and hip as WeChat.

One problem with cryptocurrencies is people tend to use them for illicit purposes — although, Charlie Lee thinks this very fact is what proves cryptocurrencies are viable. He told the audience at Money 20/20: “The reason dark markets and the Silk Road used bitcoin is because bitcoin is good money.” Pointing to how in 2011 the U.S. government shut down online poker by blocking bank payments to major poker sites, he said “You want to use money that someone unrelated to the transaction can’t block.”

When Bitcoin Magazine asked how Elixxer would deal with criminal abuses of its virtual money, Chaum replied: “This is a silly concern, because I believe it has been said that three-quarters of U.S. banknotes are in unknown locations globally.” Further, he stated money launderers tend to deal with large sums of money, not the smaller amounts associated with consumer payments.

How To Secure Your Content Management System | Hacker Noon